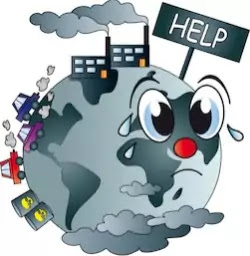 Effects of air pollution on atmosphere

Ozone holes are considered as the precursors of atmospheric modifications. Ozone holes represents decrease in the concentration of ozone in the stratosphere. Ozone is O3 molecule which prevents the transmission of shortwave ultraviolet radiations from the Sun. Ozone acts as shield between the Earth and harmful solar radiation. Such ozone holes are more common in South Pole. It has several negative impacts. Considering these impacts, an international environmental agreement was adopted which is known as Montreal Policy. It was adopted in 1987. It restricts the usage of CFCs, halons and other Ozone Depleting Substances. 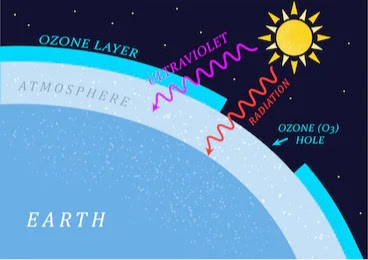 O3 + hv = O2 + O
This is how ozone forms and gets degrade in the stratosphere. Interaction of ultraviolet with oxygen and ozone prevents the penetration of shortwave radiation to the Earth’s surface. 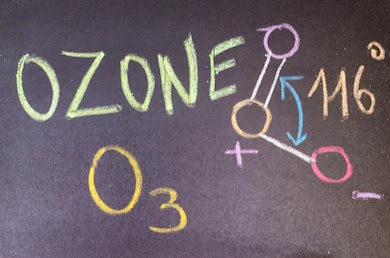 Compounds like chlorofluorocarbon, halogens, carbon tetrachloride, methyl chloroform, methyl bromide alters the steady state concentration of stratosphere. Chlorofluorocarbons are used in refrigerators, aerosol propellants, cleaning agents, foam blowing agents and as fire suppressants. Such compounds can stay in stratosphere for longer periods and they gets diffuse in stratosphere. In stratosphere, they are exposed to shortwave ultraviolet radiations of wavelength less than 220nm. They undergoes the process of photo dissociation and releases the chlorine atom.
CCl3F + hv = CCl2F + Cl
Cl + O3 = ClO + O2
ClO + O =Cl + O2
O + O3=O2 + O2
Only one chlorine atom is capable of destructing many ozone molecules. Catalytic nature of chlorine atom makes the unique property. Such reaction takes place in gas phase but gets amplified in the companionship of Polar Stratospheric Clouds.

Consequences on living organisms and atmosphere

In February 2020, scientists have claimed first large ozone hole over Arctic. The ozone hole has expanded to about 1 million square km. This is the first ever ozone hole in Arctic and is much bigger than Greenland’s ozone hole. Its formation is because of unusual cold winds that’s gets trapped. It is known as ‘Polar Vortex”. Additional aid were provided by anthropogenic compounds such as chlorine and fluorine. However, with the dispersal of polar vortex or due to splitting of polar vortex the largest ever ozone hole over Arctic gets closed. 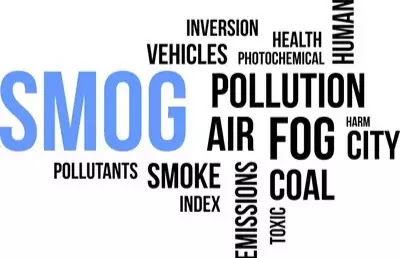 It is another major effects of air pollution. Smog is the combination of smoke and fog. However, photochemical smog is something different. It is also referred as “Los Angeles” smog. It is most prominent during summers as sunlight is a key element for its formation. It is brown coloured haze, most frequent in morning and afternoon in urban areas. It may have certain adverse effect on human health as well as on certain substances such as elasticity of rubbers.

The process of formation of photochemical smog is quite complex. It is generated when ultraviolet radiations reacts with nitrogen oxides. The sources of pollutants can be automobiles or thermal power plants and volcanoes or forest fires. Nitrogen oxide from different sources enters in the atmosphere. If it reacts with water, it will form nitric acid and it will become the component of acid rain or remain in the smog as nitric acid. If it reacts with sunlight, it forms atomic oxygen. This atomic oxygen reacts with the oxygen molecule giving rise to tropospheric ozone. Thus, photochemical smog is a mixture of ozone, nitric acid, aldehydes or volatile organic compounds, peroxyacyl nitrate and other secondary pollutants. Nitrogen dioxide, ozone and peroxyacyl nitrate are photochemical oxidants. They are capable of oxidizing certain compounds in human lungs. 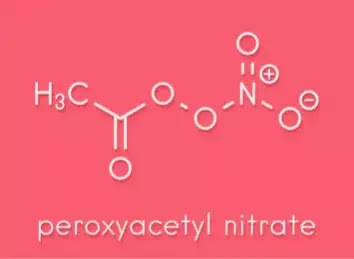 Mostly eye irritation and respiratory distress are the common effects of photochemical smog. Almost every component of photochemical smog is responsible for causing eye irritation. Oxides of nitrogen, volatile organic compounds, ozone and peroxyacyl nitrate are responsible for eye irritation. Respiratory distress are caused by peroxyacyl nitrate, volatile organic compounds and tropospheric ozone. Some hydrocarbons may be carcinogen in nature. Immunity of body gets reduced due to oxides of nitrogen. Tropospheric ozone is greatly responsible for coughing and wheezing. 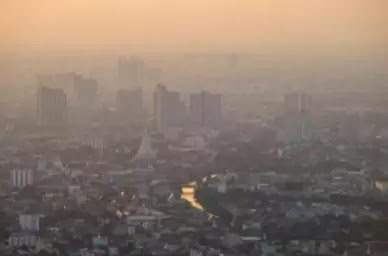