Exposure to deadly urban heat has tripled in recent decades, according to the Earth Institute at Columbia University.

Over recent decades, hundreds of millions of people have moved from rural areas to cities, which now hold more than half of the world’s population.

There, temperatures are generally higher than in the countryside because of a lack of vegetation and the abundance of concrete and asphalt that trap and concentrate heat.

The researchers combined infrared satellite imagery and readings from thousands of group instruments to determine maximum daily heat readings in 13, 115 cities from 1983 – 2016.

The analysis revealed that the number of person-days in which city dwellers were exposed went from 40 billion per year in 1983 to 199 billion in 2016.

Urban population growth accounted for two-thirds of this exposure and actual warming contributed to a third. 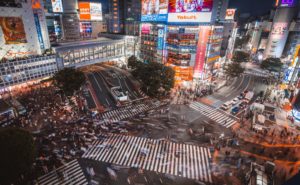 The worst-hit city in terms of person-days was Dhaka, the capital of Bangladesh.

In the United States, about 40 cities saw rapidly growing exposure. These are mainly clustered in Texas and the Gulf Coast. In many, the causes of the rises have been varying combinations of both increasing population and increasing heat.

Cascade Tuholske, the lead author of the study, said: ‘A lot of these cities show the pattern of how human civilization has evolved over the past 15,000 years. This made them attractive for farming and eventually urbanization.

‘The Nile, the Tigris-Euphrates, the Ganges. There is a pattern to the places where we wanted to be. Now, those areas may become uninhabitable. Are people really going to want to live there?’

Kristina Dahl, a climate researcher at the Union of Concerned Scientists added: ‘This study could serve as a starting point for identifying ways to address local heat issues, such as planting trees and modifying rooftops with lighter colours or vegetation so they don’t trap so much heat.

‘This study shows that it will take considerable, conscientious investments to ensure that cities remain livable in the face of a warming climate.’