To date, more than 300 local councils across the UK have declared a Climate Emergency. A number of them have aligned with the government’s goal to reach net-zero emissions by mid-century. But setting targets is only the start of the journey. If they are serious about it, they now need to take it to the next level and develop action plans to cut carbon emissions in their local area.

This will not be an easy task.

With the exception of the buildings and vehicle fleet they own, local authorities do not have a direct impact on the carbon footprints of their local area. But many local policies can indirectly shape or influence a high proportion of emissions. So, what’s the biggest lever local governments have to pull?

The answer is spatial planning: how we plan, build and manage our cities is key to net-zero.

It is widely recognised that transitioning to a net-zero economy will require significant changes to many aspects of our daily lives- from the type of car we drive to the energy source we use to heat our homes.

We hear less about the role played by land use and spatial planning. And when we do, it is often considered separately to other aspects of the net-zero agenda, or restricted to the need for more green spaces, for instance.

But spatial planning encompasses much more than that.

It determines the distribution of activities, buildings and people across a given area.

And the reason why it matters from an environmental perspective is because our daily lifestyles are hugely influenced by our immediate built environment.

Think of the carbon footprint of daily commutes: both the distance travelled and the mode of transport chosen (or available) are determined by where we live and the characteristics of the area

This partly explains why carbon emissions are not uniformly distributed in the UK. Density, something that is inherently unique to cities, leads to lower carbon emissions because it limits our footprint on the natural world and encourages lifestyles that are less carbon intensive. To be on track to net-zero, we now need to tap into these benefits. 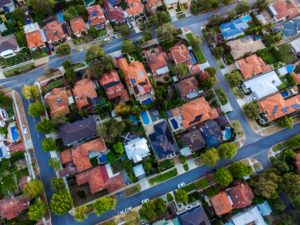 Local governments, as the local planning authorities, are the best placed to do so

Whether when drafting the local plan, in which they identify and allocate areas for development, or granting planning permission at a later stage, they can influence the location and type of new developments, for both residential or commercial units.

And this now urgently needs to be done in line with environmental considerations.

For instance, building denser housing near existing public transport and jobs is likely to have a much lower carbon footprint than sparse, out of town low-density developments which tend to be more carbon-hungry and lock people into car dependent lifestyles.

Doing this will mean going against the trends observed in past decades, where most housing was built on the outskirts of cities.

This does not contradict the need to use their other powers on transport (such as charging cars, building more cycle lanes or restricting parking space) or housing (for instance, retrofitting existing housing or ensuring better building regulation standards).

But here is the important point: successful spatial planning policies will lay the foundations for these targeted interventions to work better. For instance, the recent Transport Decarbonisation Plan commits to having about half of journeys in towns and cities to be walked or cycled by 2030: this is unlikely to be achieved unless we change the very layout of our cities.

An example of this can be found in Leeds: The Climate Innovation District, recently built on brownfield land on the banks of the river Aire at ‘gentle’ density levels, does not just stand out because of its low-carbon technology features.

Its central location, within walking distance from the city centre and its amenities, makes it easier for residents to leave the car behind: research has shown that up to 47 per cent of residents could commute using active travel or public transport. This is much more than the UK average (32%), especially outside London (24%).

It is not all under their control, but they have room for manoeuvre.

Of course, densifying existing built-up areas is not entirely in the hands of the local authorities.

Very often, it presents more upfront costs and risks for developers given the discretionary nature of the planning system- which is why most developments in recent decades have been built on the outskirts of cities.

This can only be addressed at the national level with a long-overdue reform of the planning system.

For now at least, radical change does not seem to be around the corner, as the zonal approach, which would have been the core component of the reform, has just been scrapped.

But local planning authorities have a way around it: they should make use of their Local Development Orders (LDO) powers, which simplifies the planning process by making it a rules-based system rather than a case-by-case basis; open up small sites and significantly reduce risks for builders.