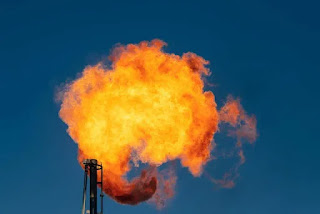 At the same time, cheap renewable energy is out-competing gas.

A new report released in December by industry analysts Wood MacKenzie predicts that “More than 75% of new liquefied natural gas global supply could be at risk due to competition from renewable energy.”

In December, the Energy Information Administration (EIA) predicted that the share of electricity in the U.S. produced by natural gas would decline “in response to a forecast increase in the price of natural gas delivered to electricity generators.” The EIA predicts that the percentage of U.S. power generated from natural gas could fall from 39 percent in 2020 to 34 percent in 2021 due to a rise in prices. And the EIA predicts renewable energy, and a return to coal in some locations, will replace that market share.

This highlights a fundamental problem facing the gas industry. Current prices are too low for the industry to make money. But when prices rise to levels where the industry could make money, the gas is no longer economically competitive because renewable energy is cheaper right now.

As gas prices rise and renewable energy prices continue to fall, the U.S. gas industry is in a no-win situation.

A recent analysis by the Institute for Energy Economics and Financial Analysis (IEEFA), for instance, found that shale gas producers in the Appalachian region of the U.S. lost another $500 million in the third quarter of 2020.

The U.S. gas industry also is suffering due to the warmer winters the U.S. is experiencing — warmer weather due in part to the burning of fossil fuels and the methane released by the natural gas industry. Warmer weather depresses gas prices because there is less heating demand.

IEEFA, which has been tracking the industry’s decline, recently summed up the reality of what the “shale revolution” has done: “The shale revolution has turned the U.S. into the world’s most prolific gas producer. Yet in financial terms, the gas production boom has been an unmitigated financial bust.”

It’s Not Easy to Pay Off Debt

From: How The Fracking Revolution Is Killing the U.S. Oil and Gas Industry (excerpt): DeSmog