Skip to content
August 4, 2020 cc admin
Mid Oceanic Ridge is the longest and uninterrupted feature on Earth’s surface. But what is Mid Oceanic Ridge? How does it form? What are the forces responsible for its formation? 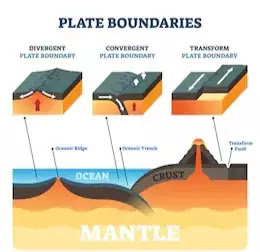 At Divergent Plate boundaries, the plate moves away from each other. It is also known as “Constructive plate boundary” because new lithosphere is developed.

At Convergent Plate boundaries, the plate moves towards each other. It is also known as the “Destructive Plate boundary” because here, the lithosphere is destroyed.

Transform faults are plate boundaries along which plates move laterally. Thus, it maintains the exposed area.

Nature has its own rules and such rules are very appropriate. Among them is the concept of isostasy.  Basically, it is the balance maintained by nature.
The concept is linked with the response of the outer shell of Earth to the large stress generated on it. The stress may be due to the mountain. Thus, to compensate for the stress generated by mountains at one place, a basin is created by nature at another place. This is how nature maintains its balance.

What is Mid Oceanic Ridge?

As the name suggests, Mid Oceanic Ridges are the mountain ranges in the middle of the ocean basin. Mid Oceanic Ridges are linear, associated and the longest feature. It exceeds 70,000 km in length. It can be as wide as about 1000-4000 km and can be 3-4 km high from the ocean floor.
Mid oceanic ridges are associated with Divergent plate boundaries. At the Divergent plate boundary, formation of a new lithosphere takes place. 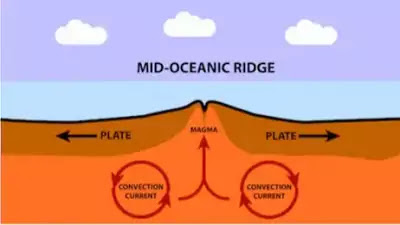 Where and how does the Mid Oceanic ridge forms?

Mid oceanic ridge forms at the boundaries of tectonic plates. Such ridges are formed due to the divergence of plates. It is also associated with the concept of seafloor spreading.
Seafloor spreading is the first concept to explain the kinematics of continental drift. According to this concept, the continents which were once connected to each other. The continents were separated from each other by ocean basin.
When lithospheric plates diverge, upwelling of mantle occurs. Such an upwelling is responsible for the formation of new lithosphere and ultimately seafloor spreading. It is also responsible for earthquakes. Jets of superheated seawater then solidifies creating a new lithosphere.

Some examples of Mid oceanic ridge

When hot basaltic lava spills on cold seawater, the margins of lava get chilled. This creates pillow lavas. Such pillow lava is solid from the upper side and is liquid from inside.

Hydrothermal Vents are the next important feature along the mid oceanic ridge. Such hydrothermal vents are like hot springs. The cold sea water seeps into the oceanic crusts through cracks and fissures.
Then such cold water approaches the hot underground magma chamber. The cold water then picks up the heat and dissolved solids from the magma and is reverted back to the ocean surface. The temperature of the water that comes out from the hydrothermal vents determines its appearance.

Warm water vents have temperature below 30℃ and the water emitted from it is clear in colour.

White smokers have temperatures between 30℃ to 350℃. The colour of the emitted water is white as it contains white compounds such as barium sulphide.

Black smokers have temperatures above 350℃. The colour of emitted water is black due to the presence of metal sulphides.
Hydrothermal vents are also home for certain microorganisms such as some bacterias. These are the organisms that are capable of surviving in extreme conditions of temperature and without sunlight. Such bacteria are referred to as “Archean bacteria”. Such organisms are dependent for their survival on hydrogen sulphide released from hydrothermal vents.

A current set of ultraslow spreading centers has been perceived. These were uncovered along southwest Indian and Arctic segments of the mid oceanic ridge. The spreading rate is about 0.8 inches per year.
It is characterised by a fully matured rift valley(which is broad and deep) and volcanoes occur at considerable interim. It might expose the mantle for a million years.

Tools i use:
Social pilot